New Zealand's sustainability product and book webstore
You are here: Home > Shop > Bookstore > Natural Environment > The Sea Around Us

The Sea Around Us 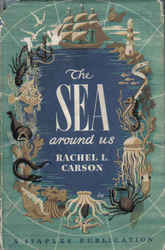 Author: Rachel Carson
Publisher:
From the author that helped start the environmental movement by waking us up to the impacts humans were having on the environment.

Here is the strange and exciting story of the seas - how they were born, how earth's life emerged from them, and the fantastic marine world within them. Rahcel Carson tells of the teeming life of the upper levels, of the icey, black, primeval depths, and of the immense forces which find their expression in the tides anc currents. Here is a story of the waves which have carved out the land and of the stupendous 'snowfall' which has built up the sea bed; of which the volcanic action which throws up huge masses on the ocean floor; of immense mountains and desolate canyons; and of the way in which the sun and the spinning of th eearth act upon the oceans.

She describes the pulsing of spring when salmon migrate and jelly-fish spawn and the mysterious creatures that have so far evaded man's efforts to capture them. She tells of the language of the waves which, translated, brings news of earthquakes and storms raging in distant waters; of the age of the sea and of land that was once as bleak as the mountains of the moon; of tides, the birth of islands, the shape of anient seas, and the hidden lands.