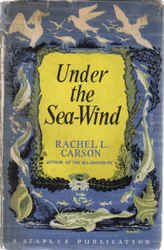 Rachel Carson whom the New York Times has described as a 'physical scientist with a literary genius', has written the epic story of the war which began with the birth of things, the war which will never know an armistice, the ceaseless war of nature in which millions upon millions die each day in the great struggle for survival.

The real hero of Under the Sea-Wind is life itself. Life is the prize for the swift of wing, the strong of tooth, the ready of claw, the wary and the armed. The creatures who play out htis unending struggle inhabit the sheltered marshlands of the coast, the open sea and the steep descent from the continential slopes to the deep abyss.

In her inspired disciplined, evocative prose Rachel Carson records the skirmishes and the battles that the fought along the shore, in the endless sky above and the endless sea below. Here is the story of the fierce-eyed jaeger; scourge of the all the tundra; of the great armadas of golden plover beating their way over northern seas to the warmth of South America; of the ancient, mysterious migration that takes the eels from the rivers to the coastal waters, thence to the great abyss of their forebears, there to spawn and then die.

Other books by the same author:
Silent Spring (softcover)