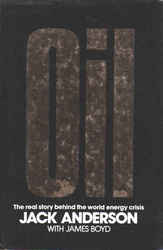 The economic crisis of the early 1980s threatened the basic cohesion of the West. It was largely caused by the thirty-fold leap in oil prices during the 1970s.

Pulitzer Prize-winning investigative reporter Jack Anderson tells for the first time the behoind-the-scenes story of the energy crisis - a crisis that should never have occurred. He exposes in fascinating detail the deals within deals in the biggest transfer of wealth in history.

Anderson has drawn on sources that only he could tap, from Texas board-rooms, the White House, Congress, to exclusive interviews with Muammar al-Qaddafi in the Libyan desert with the Saudi royal family in Riyadh. He tells a shocking and dramatic story of greed, betrayal, appeasement of economic aggression and, above all, self-serving politics which at every turn subordinated the world's long term oil security to the political advantage of the moment.